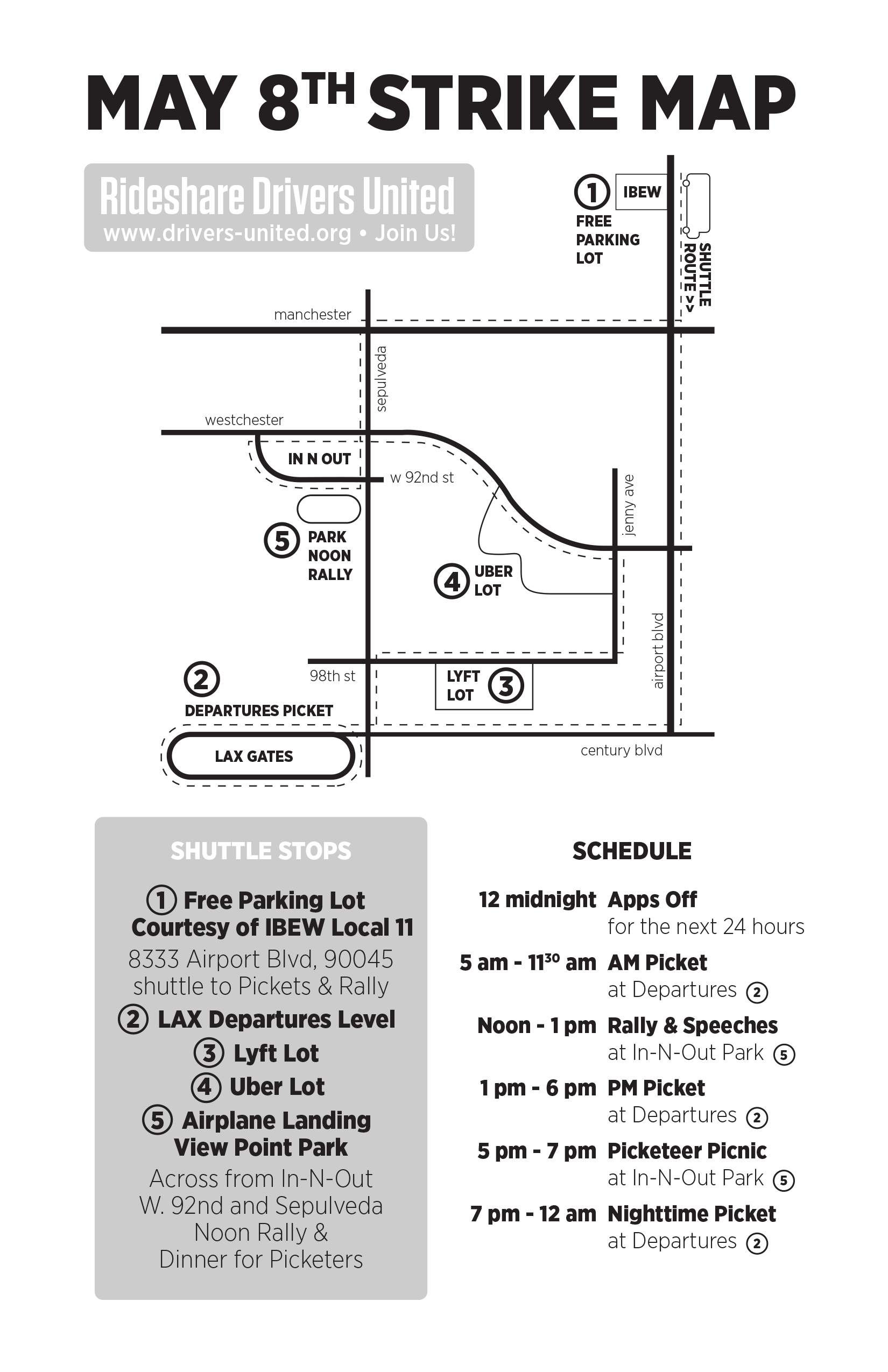 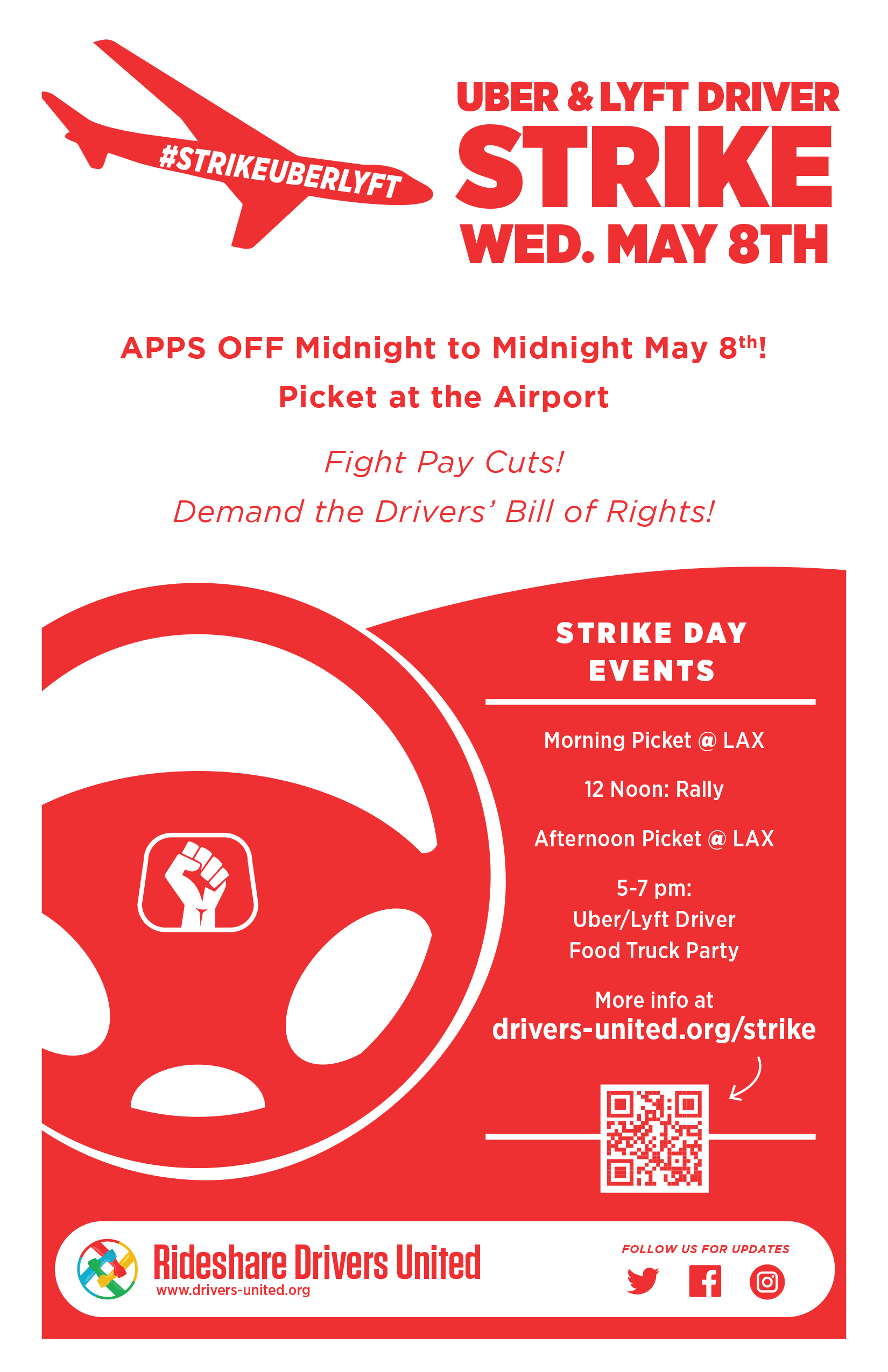 After enduring nearly two months of reduced wages in the midst of rideshare industry IPOs, the 4,400 members of Rideshare Drivers United- Los Angeles will strike both the Uber and Lyft platforms for 24 hours on Wednesday, May 8, demanding that Uber immediately reverse a recent 25 percent wage, and that both companies guarantee drivers a $28 per hourly minimum rate (or $17 after expenses), as already required in New York City.

RDU-LA members will turn off their apps for the entire day throughout the Los Angeles metro area. Members will picket at Los Angeles International Airport (LAX) terminals with colorful signs. A rally will be held at noon, where drivers will speak about the impact of withering wages other abuses inflicted by Uber and Lyft as both companies launch their IPOs.

“Uber estimates that 15 percent of their revenues come from airport pick-ups” said Karim Bayumi, a Lyft driver who typically works at the airport. “We provide an essential service, but Uber and Lyft investors are only ones reaping the benefits. Our picket and rally will show that rideshare drivers will not be invisible—we demand justice.”

Uber and Lyft drivers have faced real challenges this month. On March 11, Uber cut driver compensation in Los Angeles from .80 per mile to .60 per mile. Soon after, Lyft eliminated their multipliers, which allow drivers to earn more than the base rate of .80 per mile.

Since the cuts, James Hicks, an Uber driver for three years, says he and his wife “are treading water so that we don’t drown.” The couple were already taking payday loans to afford the $2300 dollars a month for the two-bedroom apartment he shares with his wife. “With Uber’s cuts this month,” Hicks says, “we had to bite the bullet. We moved across the hall into a one bedroom for $1900, which is what our two-bedroom used to cost.”

But while Wall Street and Silicon Valley cash in, drivers continue to bear the brunt.

“Mayor Eric Garcetti rang the bell for Lyft’s IPO just days after our strike, calling them a socially responsible company,” said Sinakhone Keodara, a Lyft driver who has faced housing insecurity. “But creating an underclass of homeless drivers as collateral damage is anything but responsible. Driving for Lyft pays below minimum wage. We need a minimum per hour rate to compensate for the fact that we sometimes miss out on the bonuses.”

In their recent S-1 filings with the Securities and Exchange Commission (SEC), Lyft says they can only be profitable if drivers are treated as independent contractors, which violates California state law. Similarly, Uber told their investors they expect greater driver dissatisfaction in the coming years.

RDU-LA demands major reforms to the industry to make it fair, dignified, and sustainable. Their Drivers Bill of Rights includes a ten percent commission cap, transparency around deactivations, the right for drivers to organize and negotiate with the companies, and community standards around traffic and emissions to ensure that the rideshare industry benefits the cities where it operates.

Sign up here to join the 24 hour strike starting May 8th. We'll connect with the movement for rideshare drivers' rights in your city (All US drivers & allies are welcome).
I am a...
Please enter a valid phone capable of receiving text messages